How to Kill The Exploiter Orb in Warframe

Source: How to Kill The Exploiter Orb in Warframe

Exploiter Orb is the toughest boss in game that is hard to find and hard to kill. That is why an essential guide needs to kill him to earn huge rewards. Warframe has numerous missions that players have to complete. In the game, various types of enemies available, and each enemy is of different levels, but you have to defeat every one of them. Warframe is a multiplayer game where to defeat the opponent, and you need to focus on your teamwork to destroy everything. Exploiter Orb not like any other enemy, and that is why killing this boss requires additional guidance and tips to progress.

Look out for Exploiter Orb in Warframe

Exploiter Orb most likely to found out in Orb Vallis, and the best thing to do is go with teammates and fight with the help of them. Before going there, required to have the Diluted Thermia; otherwise, utilizing the console calls will be not be accessed at the time Exploited Orb comes in battle. Diluted Thermia can be obtained through the operation of the “Buried debts” challenge that you need to look out the schedule of it.

After reaching on Orb Vallis, you need to go to the northeast side of Harindi Carter for finding a cave that is an abandoned station. After entering the cave, you need to follow the path of Deck 12. Jump on the upper left level of the dock 12, and their console is located. In that place, you can activate the Diluted Thermia by calling the Exploiter Orb.

In the first phase, you need to destroy several Orb’s vents to defeat the Exploiter Orb. After destroying these vents real battle with Exploiter Orb will begin. There, one vent of Orb will fall down, and after that, you need to run towards the end of the room and teammates required to destroy two more vents. These two are the frozen vents, and players need to search for the Thermia Canister for going forward to dispensers on the map. At the time of throwing the vents, you need to fight against the enemy group too.

After destroying every vent, Orb will raise up itself to the middle of the room. There Coolant Raknoids will come out that players have to defeat while dodging through the Orbs attacks. Dodging is the best thing you could be at that time. Defeat the Raknoids and go back to the first vent location that you destroyed. When each and every vent is destroyed, the first phase level will be over by leaving the Deck 12. 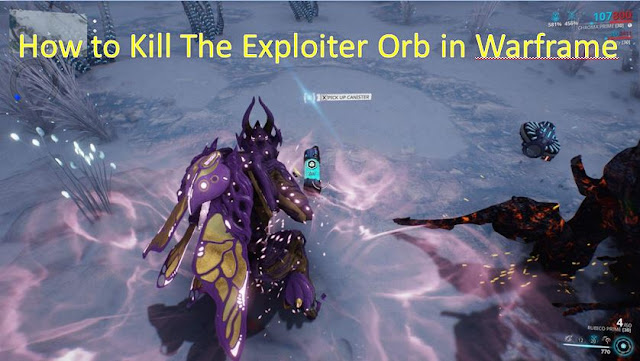 This phase is different, and for this phase, players have to leave Deck 12 and move forward to Orb Vallis. In this phase, players have to do hunt and battle with Exploiter Orb. There you need to create overheat, and then Exploiter will call Coolant Raknoids to cool it down. After defeating the one, coolant canister will fall, and that will lead to the Thermia Fractures. The Thermia Fractures will call randomly into the field, and these are required to fill the blue canister. After dropping them into fractures, the canister will turn into yellow color and throw these yellow canister on Exploiter Orb to turn it into overheat.

Exploiter Orb will begin to overheat, and when it’s done, you and your teammates need to jump on the Orb, and then an additional cutscene will show up where the enemy opens up its engine. Now you and your teammates need to shoot at the engine continuously until the flames start to begin. If you put heavy damage on the enemy, you will able to make his start fire coming out.

With all these keep defeating the Coolants Raknoids, utilize Thermia Fractures to recover the canisters. Along with it, throw it on the Exploiter Orb and shoot at the engine together to defeat the boss. After defeating it, there will be much loot available because of it a boss blast in the end, and it kills everything that comes within its radius.